Aspecting: Song of My Selves

Who is ”Satyr,” anyway? What do I mean when I say I’ve been “dancing with my Muse,” and why do I still enjoy roleplaying games as a pastime, art and profession after all these years?

I often refer to “aspecting” during various chats, posts, articles or conversations. What, though, do I mean by that term?

In the practice of aspecting, a person essentially creates (or recognizes) different “aspects” of herself as individual characters. These characters may have different personality traits, skills or knowledges than the original “core” personality, and can be really helpful if and when you’re trying to understand things about yourself. As Walt Whitman said in “Song of Myself”:

Do I contradict myself?

Very well, then I contradict myself,

(I am large, I contain multitudes.)

Aspecting is an essential part of ritual, a vital skill in art, and an underrated gift in psychology. Carl Gustav Jung hinted at its uses, though I don’t think he truly understood (or was willing to understand) that the “archetypes” he wrote about can be found, employed and even created by one’s self. I view aspects as creative masks and mirrors through which we can understand ourselves better… and thus, grow further than we would grow otherwise if we stuck to a stubborn (and often self-deceptive) sense of one Self.

You know how people often say, “I would never do that,” and then go on to do it anyway? Or how folks say “You’re not being yourself,” or “I didn’t think she had it in her”? The way people can manifest radically different personality traits or behaviors when they’re drunk, or tired, or stressed or overjoyed? These things are manifestations of unconscious and often unintentional aspecting. As Debbie Ford points out in her books (most especially The Secret of the Shadow and The Dark Side of the Light-Chasers), we all have the potential to be almost anyone under the right (or wrong) circumstances. Well, aspecting is a practice that allows a person to tap into that potential  deliberately,  intentionally, and with conscious self-knowledge.

Lots of people perform aspecting all the time, often without realizing it. When a cop puts on his uniform and becomes Officer Whatsizface, he’s aspecting someone different than the person he tries to be at home; when an actor assumes a role, when a gamer creates a character, when a priest dresses himself in vestiments to become an avatar for his god, they’re aspecting. When you take on a nickname or dress up for an event or somehow “create another self” for a given situation, you are aspecting. It’s something we humans do naturally. Folks at FaerieWorlds, cosplayers at conventions, Burning Manregulars, Live Action Role Players and face-painted football fans are all aspecting to a lesser or greater degree.

Society in general, however, doesn’t really understand aspecting. Folks don’t talk about it, much less figure out ways to handle it or balance it. And so we constantly see people broken by the stress of their “other lives”: the Marine who can’t snap out of killing-machine mode, the teacher who treats her partner and kids like students, the gamer who prefers his Half-Elf Assassin to the “boring” person he is out-of-game. At extreme levels, this can lead to dangerous disassociation: the cheating spouse who refuses to acknowledge what he’s doing, the football hero who treats girls like touchdowns, the  abuser who “would never do” the terrible things her lover’s bruised skin and terrified eyes reveal. At the extreme end, folks with Multiple Personality Disorder (MPD) unconsciously create new “personalities” to deal with unendurable trauma. And so, roleplaying an aspect becomes something “weird”in the popular imagination – a symptom of mental illness. According to popular legendry, roleplaying gamers supposedly worship Satan by pretending to be vampires or whatever because “normal” people aren’t supposed to do it.

“Satan,” however, manifests most fully in the people who most deeply fear him. Biblically, “satan” is actually an aspect of God, often portrayed as His servant and “the Adversary” (which is what satan translates to in Hebrew: adversary) but actually showing up as a sick sort of bridge between God and Man.

In The Book of Job, Satan bets God that Job would betray his faith if enough misfortunes attacked him; in the course of that book, Job eventually has a sit-down with his God, during which God reveals many elements of Himself to Job and becomes, oddly enough, closer to humanity as a result. In the New Testament Gospels, Satan tempts the Christ to show off His divine power; by refusing to do so (and thus become a slave to “his adversary”), the Christ asserts self-mastery through the ironic method of remaining humble despite His divine power. In Revelations, a titanic struggle for Creation itself wages between the “dark sides” of humanity and God, and the ultimate Unity of New Jerusalem. 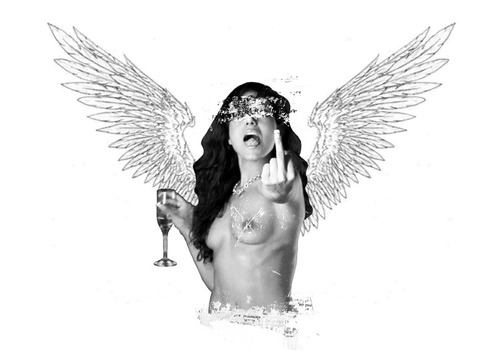 Theoretically, the final resolution of that struggle results in a new Whole. If you know about Kabbalah, however, you recognize that the end of Revelations creates a new Qlippoth – a collection of broken “shells” discarded by (or cutting themselves off from the presence of) God. According to Kabbalistic lore, those shells remain on the dark, unexpressed side of Creation, a “howling” (goetia) of angry spirits waiting to be recognized again. Even God, it seems, has a Shadow which the Divine Presence (or at least His/ Her/ Its most fervent followers) refuse(s) to acknowledge… and thus, constantly expresses in spite of themselves. The awful spectacles of religious violence and abuse become manifestations of the Shadow of each religion’s best “self”… ones often hidden and denied by pious practitioners even as they become obvious to everyone else.

Ironically, by denying our tendency to aspect, mainstream society actually nurtures situations where it can become mental illness. Jung referred to the terrible expressions of unacknowledged “selves” as the Shadow: the elements of our selves that we refuse to admit about ourselves. We see this depicted in popular culture as the Mr. Hyde phenomenon, as the werewolf, as the psycho who “seemed so normal” until cops found 13 heads in his refrigerator. As Jung, Ford, and other folks have pointed out, the tendency of mainstream society to force us into little boxes of “self” creates a tension between our “normal” personality and the sides of our selves we don’t usually express. We have holidays like Halloween where people are encouraged to “be someone else,” but at the heart of the matter, we all, as Whitman said, contain multitudes. Most of us just don’t know what the fuck to do with them.

Over a decade ago, I adopted the nickname Satyr as a way of sorting out a frustrating duality within myself. At the time, I had been wrangling for years with the inner tension of being a sensuous creative rebel who also feels deep compassion for other people and a stubborn streak of what a now-former friend referred to as “your fucking integrity.” I love to defy authority and do things that most folks consider crazy… and yet I also maintain a powerful sense of self-preservation and responsibility for my actions. A few years ago, I articulated my ethos as “Live vigorously and with honor”; at the turn of 1999, however, those words had not yet occurred to me. I had, as long ago as 1983, recognized that the characters I created in my acting roles, stories and roleplaying games were aspects of my own personality; later, in the mid-90s, I referred to the struggling parts of my self as the Vagabond and the Knight. “Vagabond” wasn’t quite the right word for what I felt, but it was close enough to describe my wild and rebellious elements.

When I would describe this to my then-therapist (whose name, again ironically, was Janis – the feminine form of the two-faced Roman god), she initially seemed concerned. “These… other selves – they don’t talk to you in voices, do they?” I had laughed: “No – I’m a writer, and putting things into archetypal poetic conceits just works really well for me when I’m trying to describe these things.” In the years since then, I’ve delved deeper into the concepts of Jung and his followers, taking those archetypal “selves” to a richer, more significant level. By around 1998 or so, I had acquired the nickname “Satyr” by way of my work on the Changeling: The Dreaming line and my affinity for the Satyr kith. When Changeling authors Nicky Rea and Jackie Cassada turned me on to the Waterboys song “The Return of Pan” sometime in the late ’90s, I felt a deep resonance with the tension expressed within the song – with Mike Scott’s internal tug-of-war between his inner Christ and his inner Pan. To me, it mirrored that struggle between Knight and Vagabond… and now, I had a new name for the latter aspect: not the Vagabond, but the Satyr.

Shortly afterwards, when I had left White Wolf’s staff and was seeking a new path and identity for myself beyond “Phil Brucato, that Mage guy,” I had a mental flash of Pan throwing back his shaggy head and laughing – laughing at me, at White Wolf, at all the foolishness that went down between us, and at the follies of the world in general. At my request, my old friend and collaborator Mark Jackson drew a laughing Pan; my then-wife Wendy Blacksin bought that image for me as my first tattoo, and I soon named my next project – Laughing Pan Productions – after that aspect. By 2004, more people knew me as “Satyr” than as “Phil,” and I realized that I liked it that way. In 2010, I was gifted with the slightly more dignified Satyros by our tribe in Greece, and the synthesis of all of those “selves” has been instrumental in my personal, spiritual and professional growth. So yes – aspecting consciously, as some of us do, allows us to use this phenomenon with healthy and conscious intent. Those of us who know what we’re doing – whether we’re cosplaying Na’Vi, roleplaying werewolves, or incorporating whole “self-aspects” into our daily physical and metaphysical lives – choose to use our aspects as mirrors and masks through which we reflect, explore, create, and heal.

Award-winning fantasy author, game-designer, and all 'round creative malcontent. Creator of a whole bunch of stuff, most notably the series Mage: The Ascension, Deliria: Faerie Tales for a New Millennium, and Powerchords: Music, Magic & Urban Fantasy. Lives in Seattle. Hates shoes. Loves cats. Dances a lot.
View all posts by Satyr →
This entry was posted in Politics & Society, Spirituality & Reflection and tagged acting, aspecting, passion, roleplaying, self, spirituality. Bookmark the permalink.

8 Responses to Aspecting: Song of My Selves

Race, Gender, Politics, and The Horrific

Now Available on Amazon, Kobo, B&N and more...See below for details!