I’ve always wanted to be a rock star. Go figure. 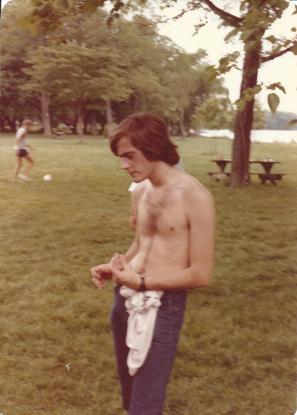 Like any red-blooded pre-teenage male in 1978, I used to air-guitar with my friend Mike Delahanty to the antics of KISS Alive II – complete with fireballs made from hairspray and lighters. [1] I envisioned myself shredding guitar like Eddie Van Halen by way of George Thorogood before a horde of shrieking fans [2], and memorized the contents of liner notes as if mere familiarity could imbue me with the power of rock gods. Unlike lots of kids, I actually tried to manifest those dreams through work. In addition to my devotion to theatre [3], I got an acoustic guitar and took some lessons, hoping soon to reel off “Ventura Highway” before packs of sex-starved girls at school.

But life is a jester. My shredder dreams got… well, shredded, pretty much… by what I would later learn was a combination of dyslexia and dyscalculia that made it more or less impossible for me to remember chords, or to finger them correctly even when I could remember how they were supposed to go. Sheet-music looked like cuneiform to me, and I could no more translate those notations into musical notes than I could play Beethoven’s 9th on a kazoo.

There are, thankfully, many ways to skin a rock god.

Around the time I realized I would never be Van Halen jr., a different instrument began to literally resonate with me: bass guitar. I had already envisioned myself as the heir to Gene Simmons’ fire-spitting demonism [4], and so it’s not surprising that I also found his thundering musical undertone appealing. Geddy Lee, too, was an inspiration, although it would be literally decades before I figured out just what the hell he was doing with that four-stringed guitar to make it play like that. [5] Realizing that bass guitar is typically played strong-by-string, not in chords (though you can play chords on it too), I began paying more attention to the deep end of the songs and bands I adored. Around 1980, I had seen the Plasmatics on Tom Synder’s Tomorrow show, and – noting bassist Jean Beauvoir’s island of cool amidst the band’s insanity – I was like “I wanna be HIM.” It was a few years before I twigged to the fact that bass might be my instrument, but by the time I realized that my mind and hands were more amenable to four strings than to six, I had begun listening for the basslines underneath those soaring machine-gun leads.

And Oh, my, the things I found there… 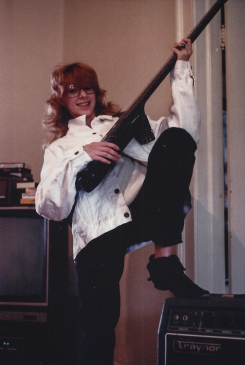 Once I started actually listening to the bass, I realized the magic of that particular instrument. It’s been said that bass is easy to learn but difficult to master, and when I tuned my ears to the basslines I recognized why. Certain artists – John Entwistle, Jean Beauvoir, James Jamerson, Steve Harris, Geezer Butler, Stanley Clarke, Rick James, Geddy Lee, Klaus Fluoride, John Paul Jones – propelled their bands through four-string magic. Several of them – like Harris, Butler, James and Lee – were primary songwriters and/ or band leaders as well. On top of that, the bass was big, pumping out booms and glides and rapid-fire counterpoints in the hands of a master of that instrument. When a dude who’d been crashing at my mom’s house left a Fender-copy bass behind, I decided to learn how to play. By the time he took it back, I had acquired a Cort Steinberger “headless” copy [6] and a practice amp, and was listening to anyone who might teach me how to play.

My early years of college introduced me to other bass players whose style grabbed me: Chronos from Venom, Tina Weymouth from the Talking Heads, George Kaufman of the Nails, Peter Hook of Joy Division, Lemmy Kilmister from Motorhead, and Kerry Hatch and John Avila of Oingo Boingo, among others. Concrete Blonde’s Johnette Napolitano became one of my lifetime crushes, with the string-popping magic of Flea, Bootsy Collins, and a legion of funk-players adding to my desired arsenal of musical accomplishment. 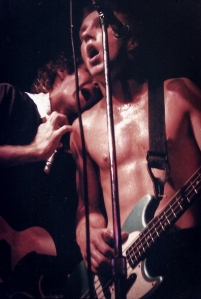 I got to be marginally friendly acquaintances with my classmate Dave “Oderous Urungus” Brockie, who even in those pre-Gwar days was a local rock star thanks to his band Death Piggy. [7] Dave certainly didn’t teach me anything about bass hands-on, but I still got the message: bass guitar was a powerful instrument, and I should play the fuck out of it.

And so, whenever possible, I did…

(Dave Brockie, pre-Gwar at the Death Piggy/ Wendy O. Williams gig. This photo wound up in the Death Piggy compilation Smile or Die, along with several others I took at the same show. That made me happy. Poor Dave. Kids, don’t do heroin. Seriously, don’t.)

EXTENSIVE FOOTNOTES OF THE GODS

1 – Boys on the cusp of puberty are dumb. Really, REALLY dumb. Even dumber than girls at the same age, which is saying something. I know. I was one. On the smarter side, Mike also turned me on to Deep Purple and Rush, and had a genuine gift for music that I envied with preteen monomania. There’s a shot of Mike below, a few years after these antics, with my “borrowed” Fender-copy bass.

2 – If, I assured myself, I ever received the fabled three wishes, my first one would be to see normally without my glasses and my second one would be to play guitar like a combination of Van Halen, Thorogood, and Mark Knoffler, with a side-order of Hendrix Because Fucking HENDRIX. I figured that all the other goodies in life would follow naturally from those first two wishes.

3 – A devotion that, in many ways, literally saved my life and has shaped it ever since.

4 – I later learned how to spin fire and do other crazy shit as well. Being a bearded dude, I never learned how to spit that element, Simmons’ style, but fire-stunts became part of my creative repertoire too. Amusing enough, Mike also considered himself the “Gene Simmons” of our imaginary rock band. Man, these footnotes are almost as long as the article itself!

5 – It’s a longstanding complaint of mine that I do not compare myself to, say, Dee Dee Ramone when I play bass, but to Geddy Lee. “You’re comparing yourself to Geddy Less again” is shorthand in our home for “You’re beating yourself up for being merely GOOD at what you do, instead of world-class.” That said, I have eventually puzzled out some Geddy Lee bass lines; my band, Telesterion, now messes around with Rush songs like “Fly by Night” and “Temples of Syrinx” during practice. We’re a long way from adding them to our set list, but that’s certainly been discussed.

6 – Inspired by Geddy’s adoption of the Steinberger during Rush’s Signals to Power Windows period. The image by that text, incidentally, is Cathi with my Cort headless and my amp.

7 – …which I saw about a bajillion times before they morphed into Gwar. In the last of those gigs, they opened for a post-Plasmatics Wendy O. Williams in one of the most intense concerts I have ever experienced. I saw Gwar’s second gig, too, and even jammed with Brockie a few times in his party-band Conglommo. I didn’t play bass, though – that was Brockie’s instrument. I played harmonica. Gods, was I bad…

Award-winning fantasy author, game-designer, and all 'round creative malcontent. Creator of a whole bunch of stuff, most notably the series Mage: The Ascension, Deliria: Faerie Tales for a New Millennium, and Powerchords: Music, Magic & Urban Fantasy. Lives in Seattle. Hates shoes. Loves cats. Dances a lot.
View all posts by Satyr →
This entry was posted in 50 Rocks, Bio & Interviews, Music, My Work and tagged claiming power, music, Satyr. Bookmark the permalink.

2 Responses to 50 Rocks: Part One – Fire and Four Strings

...everything you need to know about Alyssa Royse, and a lot of stuff you don't...