(For Part One in this series, go here.) 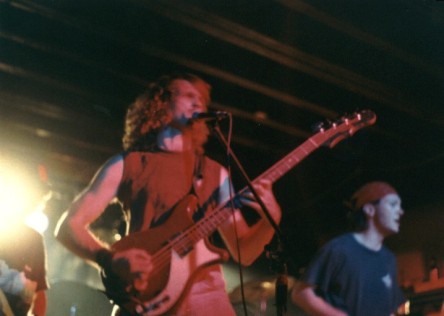 To be blunt, I sucked.

Sure, I had a bass. For a few short months around 1983, I had two of them. That did not, as I realized, confer an instant understanding of how to play the fucking thing. I could not afford lessons… and anyway, as I had learned at my expense years earlier, a music teacher would expect you to learn sheet music and chords I could not learn. I was, at the time, taking a massive class-load too, and so everything I learned about bass I learned by ear, experimentation, and occasional bits of advice from friends… most of which was wrong. [1] Aside from tuning, I knew pretty much zero about practical music theory, could not keep track of given notes on a scale, or play anything except through rote memorization. 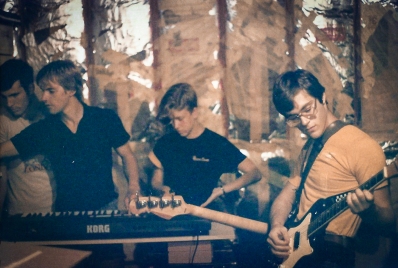 (Me and Greg and a few of our friends in Greg’s basement, summer of 1984. Yes, I am wearing two guitars. How metal of me, right?)

Even so, I managed to jam with a few people here and there, most of whom were supportive of my efforts and told me I had a natural gift for the instrument. I co-composed (“wrote” is too formal a word) a song called “Rastafai Voodoo Doll” during a drunken rampage with our dorm-floor’s resident punk-rocker Wes, who later went on to found the band Mudd Helmet. [2] I made some noise with my high-school friend Greg Wilkenson, who had put his Post Office salary into a basement full of musical instruments, rocked out with various other friends, and actually managed to puzzle out “Strobe Light” by the B-52s and a handful of other songs. Sadly, I had not the slightest idea what I was doing, and so when I actually auditioned for bands I was given a kind but firm no.

At least I learned a lot of things not to do.

For the most part, my rock-star dreams got subliminated into my college DJ gig with WVCU, where among other things I debuted “With or Without You” on Richmond’s airwaves, played “Oh Sherry” on 78 RPM because I could, and opened my “Music for a Monday Morning” shows with “Holiday in Cambodia.” Hell, if I couldn’t play music in person, I’d play it on the airwaves. Graduating college, however, left me without any sort of gig other than sheer fantasy. Okay, I jammed with some stoner friends in their apartment, but if anyone had bothered to record the results I would probably want to wipe those tapes clean. On top of that, when a neighbor burgled the apartment I shared with my then-wife Cathi, the fucker stole my bass. Sure, he left the amp behind (it was too heavy to run off with), but I figured I was done.

This around where Todd Sale and Chris Bernardo come in.

Cathi and I were walking home from the grocery store on a gorgeous spring day when we noticed two dudes playing guitar and keyboards on the front porch of the building next to our own. Within minutes of dropping off the groceries, I introduced myself; within minutes of the introduction, they invited me to jam. Chris had a bass but no amp; I had an amp but no bass. It was a match made somewhere eardrums fear to tread. I recall Todd calling out to a pair of passing girls “Hey, we’re in a band.” The girls did not respond. It took us a while before we actually sounds like anything other than noise, but we took that while to get better. This was around 1988. By ’89, we’d met Bill – an upstairs neighbor of Chris, who had wayyyyy more patience with us than we deserved – and had learned the most important thing a bunch of would-be musicians could learn: listen to one another. We also started taping the practices… and oh, gods, did we suck.

But we got better.

I think it was winter ’88 or early spring ’89 when we answered a drummer ad from a dude named Mike Stillwell. Things fell together pretty quickly after that. Mike, Todd and I had a natural chemistry, and we nabbed a hotshot string-bender named Tony to add to the group. Although Chris soon bowed out (he was a pop guy, and we were metalheads [3]), our first lineup played a gig at Rockitz, near VCU, under the name Silent Alliance. Hell, we even managed to do a clumsy version of “Sanctuary” by Iron Maiden, and I was able to add a Steve Harris bassline to my list of accomplishments. We fired Tony for being an egotistical no-show at rehearsals, and then Chris left. Todd, Mike and I went looking for new folks. By the later part of that year, we’d added a singer named Squiggy and a lead guitarist named Scott Fogleman. Under the name Lonesome Crow (from the Scorpions track and album of that name), we built an hour-long playlist of mostly original work, and began to play out.

It was fun while it lasted…

HERE WE GO AGAIN WITH THOSE FUCKING FOOTNOTES!

1 – As I learned only two years ago or so, one of the first bits of bass-knowledge screwed up my ability to understand the instrument. An early college friend had told me that the fifth interval of a chord was the third, and the eighth was the fifth. If you know anything at all about music and/ or guitars, you can see why this made things difficult.

2 – Several days before classes began, the four of us who had shown up early for freshman orientation got drunk, noticed a marionette stuck up in a tree, disassembled a bed, knocked the puppet out of the tree, and adopted it as our mascot. Wes put a leash and dog collar around its neck, and he and I ran up and down the halls swinging it in circles chanting “RASTAFARI VOO-DOO DOLL! RASTAFARI VOO-DOO DOLL!” We grabbed some paper and scribbled out something like “Rastadari voodoo doll/ Western civilization gonna fall/ Murder your in-laws/ With Rastafai voodoo doll!” Ah, college… Incidentally, in the linked video, Wes is the guy on the mic.

3 – The sticking point, as I recall, was Chris’ desire to cover “Take My Breath Away” by Berlin… a song that band itself detested, as it sounded nothing like their other work but made a pile of cash for them anyway. As both a punk-and-metal guy and a dude who liked Berlin’s earlier work, I was not in favor of that tune. Todd and Mike hated it as well. Chris used to play the opening notes on his keyboard as a semi-joke, but it was clear he really did want to play it. When he quit, it was on good terms – we just had the proverbial “creative differences.” I think he wound up playing in another band, and the rest of us certainly did the same.

(Silent Alliance, 1989. That bad hair and pornstach were short-lived attempts to look more interesting. In that regard, they succeeded; I had people telling me, for a year or so, how much I looked like Weird Al Yankovic. Not the look I was going for back then…)

Award-winning fantasy author, game-designer, and all 'round creative malcontent. Creator of a whole bunch of stuff, most notably the series Mage: The Ascension, Deliria: Faerie Tales for a New Millennium, and Powerchords: Music, Magic & Urban Fantasy. Lives in Seattle. Hates shoes. Loves cats. Dances a lot.
View all posts by Satyr →
This entry was posted in 50 Rocks, Music, My Work and tagged music, Satyr. Bookmark the permalink.