A State of Tender Connection (On Wyld Feet, They Fly, Part I)

O! the music of their feet – of their dancing goblin feet!

O! the magic! O! the sorrow when it dies. 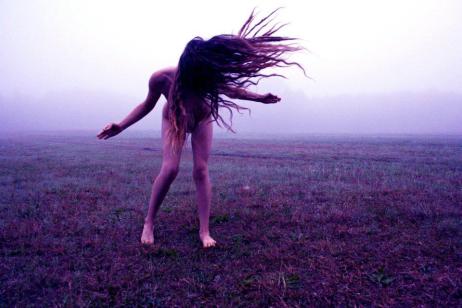 Beneath my soles sang the pulse of the world. It was spring 2006, and I’d been hiking the Appalachian Trail with my friend Pooka, barefoot as a hobbit on a dream-date with Mordor.

That morning, I awakened to a misty haze. A storm the night before had cloaked our campsite with otherworldly fog. Entranced, I’d stirred Pooka from her sleep and opened the door-flap to reveal a lush green faerie grove. “Wow,” she breathed, “there are no words for this.” Thunderstruck, we stepped out to savor the splendor of it all. After my drowsy hikemate returned to sleep, I wandered off like some enchanted princeling, as close to that living land as I dared. Although I met no faerie maidens in that mist, it would have been perfectly appropriate if I had done so… 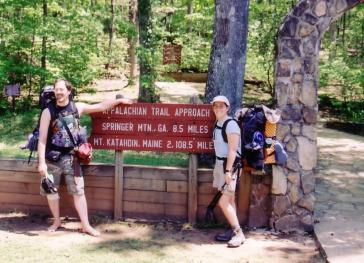 There’s a reason folks call faeries “elementals.” Such entities are forces of Nature incarnate. What, then, could be more natural than the point where a living being joins the living earth? For most creatures ― certainly for those who walk as we do ― that point of contact is the foot. Humble, abused, often hidden from view, our feet connect us to Nature, taking us on journeys and bearing our weight when we go. For better and worse, feet anchor us to earth. And in that point of contact, there’s magic to be found.

Magic, as we know, is the realm of Faerie. And although many legendary fae slide, slither or fly, most faerie beings in art and literature walk like mortals do. Even when they appear in familiar guise, however, such entities remain somewhat otherworldly. And so, for generations, artists and poets have portrayed our strange cousins with bared or monstrous feet: goat’s cloves, raven’s claws, duck’s webbing and horse’s hooves. Quite often, though, they have feet much like our own. These feet might be tender, like those of Hans Christian Anderson’s Little Mermaid, or tough as oak, like the uncanny Hornfoots of George R.R. Martin’s Song of Ice and Fire. Although Black Sabbath might claim that “faeries wear boots,” authors like J.R.R. Tolkien, illustrators like Arthur Rackham and gallery painters like John Waterhouse often portray them with no shoes at all. Barefoot, as was I, on the elemental earth, these fey figures remain “close to the land” from which they came.

Traditionally, mortals who live close to Nature or the Otherworld go barefoot, too. The peasants, bohemians and lovers who grace the paintings of William-Adolphe Bouguereau are clearly human, yet retain a fey luminescence. Unshod adventurers like Dennis Cramer’s Mara of the Celts or Edgar Rice Burroughs’ Tarzan of the Apes abhor the corruption of mainstream civilization. Johnny Appleseed strode barefoot across American wilderness, while a free-soled beggar maid seduced King Copphetua just by being herself. To dare rough terrain and social disdain, such characters dance across a wild edge. The curious maiden in Edward Robert Hughes’ painting Midsummer Eve (1908) steps unshod into an enchanting faerie ring; it all seems innocuous, but… well, faeries are faeries, and nothing about them is predictable. 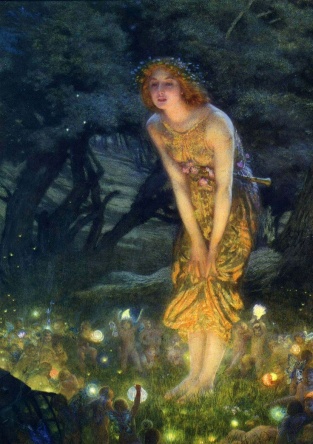 To many modern folks, going barefoot mingles child-like daring with subversive hedonism. It’s not surprising that the same supermarkets which ban bare feet among customers carry magazines filled with unshod models and celebrities. This tension between civilized restraint and primal rebellion can become amusing, arousing, embarrassing, even violent. In his 1971 book Kent State: What Happened and Why, James Michener quotes a local mother who asserts: “Anyone who appears on the streets… with long hair, dirty clothes or barefoot deserves to be shot.” Faerie tales arise from such vibrant social and symbolic tensions, and so the significance of feet ― bare or shod, human or otherwise ― among such tales seems perfectly natural.

I’m no stranger to those tensions. As a boy, I wore shoes and socks constantly… which, considering that I spent much of my childhood in Hawaii, made me seem a little odd. When puberty hit, however, I began sneaking out at night to run barefoot through Virginia woods. Those nights spent breathless in the dark, fearing discovery far more than injury, birthed a pagan place within my heart. I reveled in the sensations of raw earth and sharp stones, feeling more alive than I ever did in daylight.

At the time, I remained shy about my feet. It took college, yoga, dance classes, and a series of shoe-hating girlfriends to shake my inhibitions. That communion with the Appalachian Trail fulfilled a deep desire. There, the experience was total. For better and worse, I keenly felt the land beneath me.

On a literal level, bare feet feel. A person who goes shoeless senses each rock and puddle in his path. The texture and temperature, sharpness or smoothness of the terrain comes through without buffer or restraint. In Deerskin, Robin McKinley’s variation on the Donkeyskin/ Catskin/ Tattercoat theme, barefoot Lissar declines a friend’s request that she don shoes to visit the king, saying “I like to know where I’m walking. In shoes, I’m always walking in shoes.”

Bare feet also seem vulnerable. Fears of broken glass or sidewalk plagues inspire most folks to slip on sandals before venturing outdoors. Biblical scriptures cite sharp stones and serpents’ teeth beneath an unshod heel. But beyond the practical (and exaggerated) dangers of barefoot progress lies a pervasive social disapproval. Among societies that favor footwear, bare feet are considered coarse, vulgar and perhaps even uncanny. The wolf-girl in George MacDonald’s tale “The Gray Wolf” or the swimmer in Paul Darcy Boles’ story “She Sells Sea Shells” seem immediately strange because they walk barefoot comfortably across sharp stones. The unshod inhabitants of Spectre in Tim Burton’s fable Big Fish (2003) appear to be pleasant enough, yet come across downright… peculiar. Outside the realms of beach or bed, naked feet often violate convention. Like Brigitte Bardot’s wild Juliete in Et Dieu… crèa la femme (1956) or Paulette Goddard’s Gamine in Modern Times (1936), a barefoot rebel seems to undermine propriety. 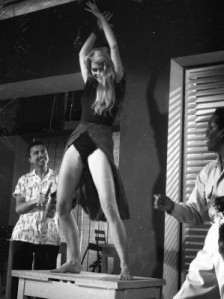 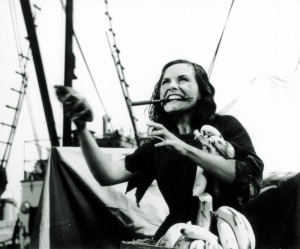 (Bardot and Goddard, kicking propriety out the nearest window.)

Faerie beings, traditionally speaking, are intrinsically elemental – so much so that they occupy not only the raw surface of our earth but often dwell somewhere beneath its crust as well. Sub-liminal entities that exist “below the threshold” of both the living world and the conscious mind, they move through the human world in a state of tender connection to some dreamlike clarity we mortals often sense but rarely truly understand.  It’s no surprise, then, that both faeries and the people like them are rebels against human convention, literally “in touch” with primal elements. Human “civilization” is all too often measured by retreat, insulation, and even conquest of that elemental realm. And so, to refuse such insulation is to step beyond the mortal comfort zone and risk the hazards of a raw and living world. 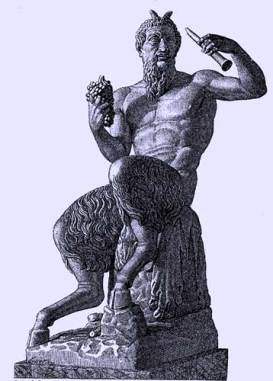 This essay first appeared as an installment of the Folkroots column from Realms of Fantasy magazine Vol 15, #8, December 2008. Originally titled “Foot-Notes,” it has been revised and expanded for this blog. Copyright © 2008/ 2014, by Satyros Phil Brucato. All rights to the illustrations remain property of the original artists, and no challenge to those rights is intended here.

Award-winning fantasy author, game-designer, and all 'round creative malcontent. Creator of a whole bunch of stuff, most notably the series Mage: The Ascension, Deliria: Faerie Tales for a New Millennium, and Powerchords: Music, Magic & Urban Fantasy. Lives in Seattle. Hates shoes. Loves cats. Dances a lot.
View all posts by Satyr →
This entry was posted in Uncategorized. Bookmark the permalink.

1 Response to A State of Tender Connection (On Wyld Feet, They Fly, Part I)